Sankt Annæ Plads has been revitalised and renovated with a view to creating a new urban space and improving access to Ofelia Plads, the underground car park and the Royal Danish Playhouse. Furthermore, the project has climate-proofed the historical buildings in the area against flooding.

The populations of Danish cities are growing, placing increasing pressure on urban areas to ensure their inhabitants’ well-being and a good quality of life. In parallel with this, modern cities are at risk of ever more frequent flash flooding as a consequence of climate change. The Sankt Annæ Project set out to tackle these challenges, providing a comprehensive solution drawn up in close collaboration with the Kvaesthus Project.

The Sankt Annæ Project encompasses the renovation and climate proofing of Sankt Annæ Plads, Kvæsthusgade and the stretch of Nyhavn from Toldbodgade as far as the harbour. The project also aimed at reducing traffic in the area. The newly renovated area opened in 2017.

A new space for urban living

Sankt Annæ Plads is situated in the heart of Copenhagen in the centre of the historic Frederiksstad. The square was once filled with parked cars, but the new underground car park forming part of the Kvaesthus Project has created space on Sankt Annæ Plads for city life to flourish, and strengthened links to the new amenities around the Royal Danish Playhouse and Ofelia Plads.

The sharply defined strip of lawn that forms the focal point of Sankt Annæ Plads has been consolidated and extended so that it now stretches all the way from Bredgade to Kvæsthus Pier and the Royal Danish Playhouse. A playground has been built on the square, and a broad pavement has been created along the row of houses, with space for on-street dining.

Kvæsthusgade been given a facelift with a new road surface and trees – and the outermost end of Nyhavn has been surfaced in keeping with the rest of Nyhavn. Here, too, new space has been opened for city life.

Sankt Annæ Plads is lower than the surrounding area – including the quayside – and in previous years, this has resulted in the square being flooded and damage to the area’s historic buildings.

One task of the Sankt Annæ Project has therefore been to lay heavy-duty storm water pipes beneath the entire length of the square. These collect water running off rooftops and run-off from the car park. Furthermore, the entire newly renovated square has been re-landscaped into a bowl that diverts rainwater away from the buildings’ façades. The sunken area between the trees in the centre of the square is transformed into a riverbed during heavy downpours. This quickly diverts the rainwater away from the façades of the surrounding buildings, down towards Kvæsthuspladsen and out into the harbour.

Gutters have likewise been added to the road surface on Kvæsthusgade and Nyhavn Øst, into which large amounts of rainwater can run and be channelled out into Nyhavn.

Everyday rainfall serves to keep the grass, flowerbeds and trees verdant, while the walls bordering the sunken lawn areas on Sankt Annæ Plads function as seating. 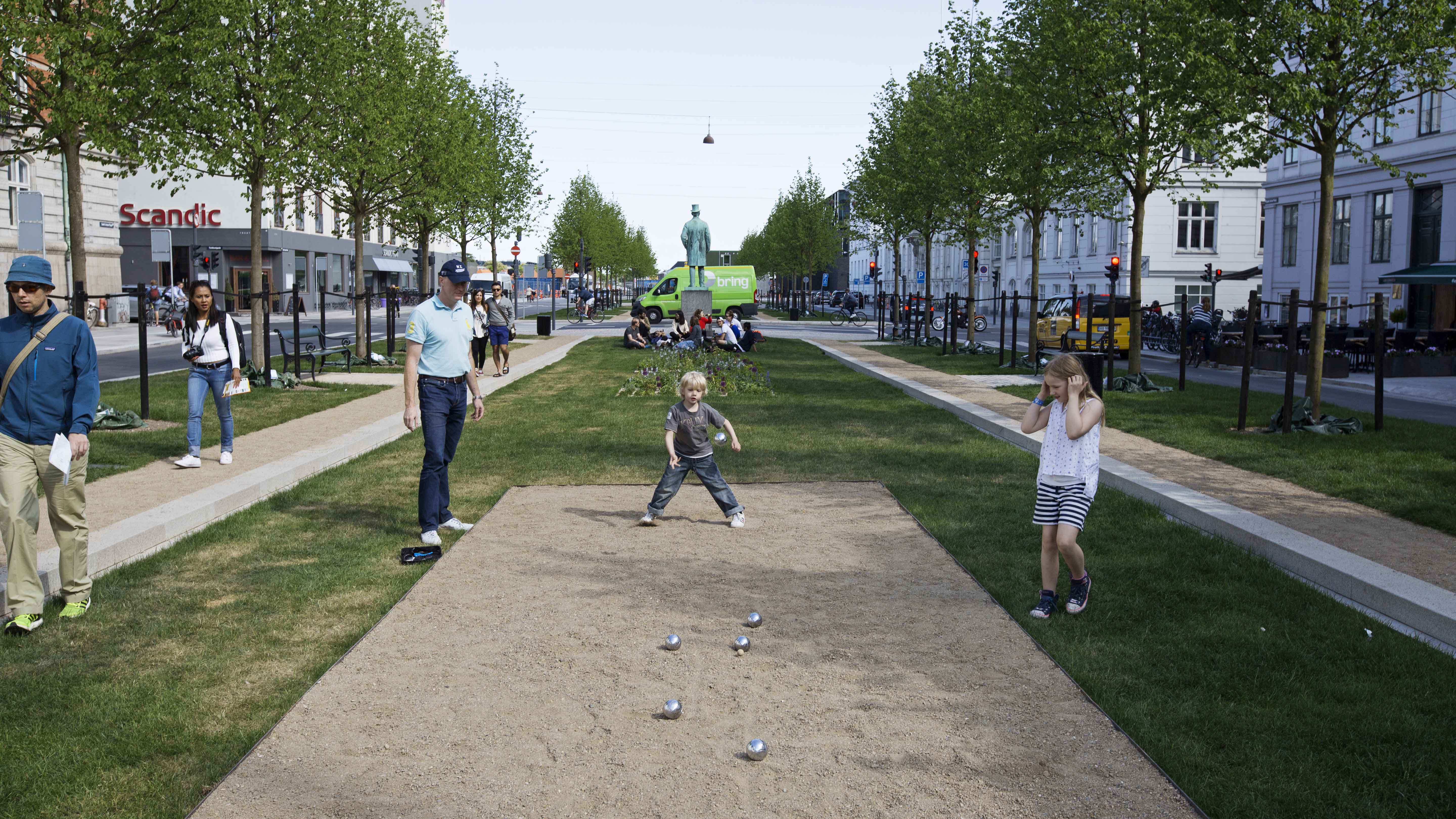